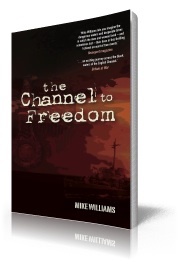 Channel to Freedom, is the third part of the fictional trilogy, describing the role and operations of a naval Special Forces unit, based on Tresco, in the Isles of Scilly. It describes the part played in World War 2, by this ultra-secret unit, from D-Day until the end of the war in Europe. So secret was the real-life flotilla, that news of it was not released, under the Official Secrets Act, until 1995.Author

The third part of a fictional trilogy, describing the role and operations of a naval Special Forces unit, based on Tresco in the Isles of Scilly.

It describes the part played in the Second World War, by this ultra-secret unit, from D-Day until the end of the war in Europe. So secret was the real-life flotilla, that news of it was not released, under the Official Secrets Act, until 1995. As the war moves to its climax, the Germans become ever more desperate to regain lost ground.

In operations demanding the highest levels of courage and personal daring, Lieutenant Commander Richard Tremayne’s specialist experience is called upon to counter new German threats. Advanced enemy technology, providing them with battlefield advantages over the Allies, becomes one of his major targets, set against impossible timescales and the most terrifying personal threat.

Leading his highly trained team, he fights on land and at sea, ranging around Europe from the Kattegat to the east coast of Ireland and to the Mediterranean islands off Toulon, as well as his familiar battlegrounds of Brittany. Such covert operations, sometimes straying into neutral waters, place intense political pressures on Tremayne, demanding from him the utmost sensitivity – as well as results.

Praise for the Trilogy…

‘I was once again transported back into Navy uniform and enjoy[ed] being part of the Tresco Flotilla family. I found it hard to put the book down and found myself carrying it around with me and reading it whenever I had more than a few minutes to spare.’