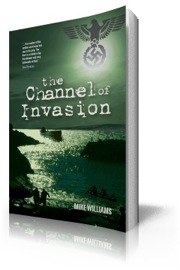 A hidden and brutal war of subterfuge, stealth and deception is being waged along the English Channel and the Brittany coast. British Intelligence has cracked the Enigma Code and Allied forces have, for a short time, inflicted heavy losses on the U-boat Wolf-packs preying on shipping in the English Channel – until now.

Plans are also well advanced for the invasion of Normandy. Richard Tremayne the Flotilla Commander of a clandestine Special Force Naval unit operating from the rugged coastline of the Scilly Isles is once more in the thick of it.

Author Mike Williams again delivers a soul-stirring tale of heroism, courage and sacrifice from the ‘small boat men’ and remembers the men and women who remain unsung, but who gave so much in the protection of our coasts and helped liberate France.

This is the second novel to feature Richard Tremayne (described as a modern day Hornblower or Aubrey for the 1940s) in wartime operations set in the Scillies, the English Channel and Northern France.

Praises For the Trilogy

‘…. a great read about the operation of the SBS… It is a must for anyone who served in the RN and RM.’