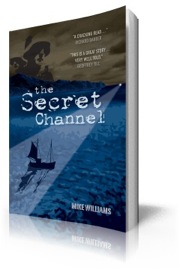 During the Second World War a great secret was kept from the Nation – and the enemy. Unknown to a war torn Britain, another war of intrigue, covert operations, spies, intelligence gathering and daring was being fought. The battlefield was the English Channel. Under great secrecy an elite force of men and women were gathered on the remote coastline of the Scilly Isles. These men and woman, British and French, courageously kept open secret channels, between England and France, during the Second World War.

The Special boat Operations (SBO) was central to British Naval strategy and planning which operated in a secret and dangerous world at a time when Churchill demanded that ‘we set Europe ablaze’. The SBO was a radical departure from Royal Navy tradition but their ingenuity indomitable spirit, loyalty and success was a major factor in the final success of the invasion of Europe by Allied force.

Praise for the book…

One of the last real life characters which inspired Mike Williams to right the Tremayne series recently passed away. His exploits are detailed in the Times article HERE.

The author pays his tribute to one of the silent hero’s of WW2 HERE.