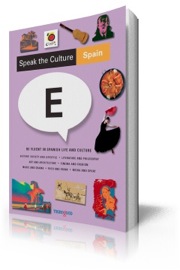 Speak the Culture: Spain, the second in the Speak the Culture series explores the culture of everyday Spanish life - from politics to wine, sport to folk music - building an engaging, superbly designed insight into what it means to be Spanish in the 21st century. By the time you get there you'll know exactly what makes the locals tick.

Spain is a complex country. Beyond the stereotypes of sangria and bullfighting lies a cultured mosaic of regions, languages and customs. Speak the Culture: Spain picks at the surface to uncover the key events, themes and people that have shaped the nation, from green Galicia to dusty Andalucía.

From the lingering Moorish flavours of Spain’s Middle Ages to the awful rupture of modern Civil War, the turning points of Spanish history are made flesh, revealed alongside cultural icons like Miguel de Cervantes, Pablo Picasso and Pedro Almodovar. Speak the Culture: Spain gives you the essentials on each figure and their achievements.

Speak the Culture: Spain also explores the culture of everyday Spanish life – from politics to wine, sport to folk music – building an engaging, superbly designed insight into what it means to be Spanish in the 21st century. By the time you get there you’ll know exactly what makes the locals tick.

Who should but this book?

Residents in Spain and those thinking of living there, second home owners, business travelers, holidaymakers, students of Spanish – anyone interested in Spain and its culture.

1. Identity: the foundations of Spanish culture
2. Literature and philosophy
3. Art and architecture
4. Performing arts
5. Cinema and Fashion
6. Media and communications
7. Consuming culture: food and drink
8. Living culture: a day in the Spanish life

‘Speak the Culture: Spain is the second in a new and exciting concept of travel and culture guides. Perfect for residents who want to immerse themselves in Spanish culture and life, it provides history, literature and philosophy, performing arts information, cinema and fashion, media, food and drink culture, and information about daily Spanish life. It takes a different approach than typical guide books, providing real-life experiences and exploring what really makes the Spanish tick.’

‘When I’m off sunning my self in Espana I always make sure I look and feel the part. Hey, I may not speak the language but thanks to Thorogood’s Speak the Culture I feel just as Spanish as the next person.’

‘Rather then just concentrating on useless phrases to disappoint your waiter with, this book focuses on the history and lifestyle of the country, while also looking at their architecture, food and literature. So rather then going to a gorgeous country and spending all day cemented to the beach go there with a little knowledge and embrace it.’_

Beauty and the Dirt

‘The second in a series of books (the first was on France) that promises to unravel the DNA of a nation. It’s like a breezier, brighter version of one of those Contexts sections in the back of a Rough Guide, a tapas menu with bite-sized chunks on everything from history to film.’

‘Whether you own a second property in Spain or visit as a tourist, you can get much more out of your experience by exploring what makes the Spanish tick.’

Andrew Whittaker is a successful journalist and writer who has traveled widely, and written extensively on France and the Mediterranean countries. Speak the Culture: Spain, is his second book in the series.

The UK’s best selling guide to Spain and Spanish Property – on sale in WH Smith, Tesco and all leading newsagents.

Whatever your business needs, Spanish Express offers a complete range of language services, from one-to-one courses, translation servicesto closed group course and seminars. Our reputation has been built on our ability to provide clients with innovative, cost-effective and high quality language and cultural training. Over the past 5 years we have built a large portfolio of companies and clients, both from the UK and Spain, which has in turn enhanced the services we offer.

Please click on the thumbnail to visit their wesbite.

InMadrid is a free monthly magazine brought to you by an international team of writers with one thing in common: a love of Madrid city. For twelve years we have been bringing the best of the city to foreigners and Spaniards alike, all written in the English language. To keep up to date with concerts, art, theatre, nightlife and culture in the capital, don’t miss an issue of InMadrid. On the first of every month, you’ll find the magazine at the distribution points listed here. If you can’t find us on the street, then visit www.in-madrid.com where you’ll find extracts from each month’s issue, useful information about Madrid, as well as a PDF version of the magazine.