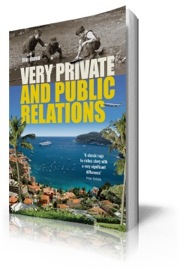 In this searingly honest autobiography, Jim Dunn takes us on a rollicking ride from poor boy growing up gay in a small town on the west coast of Scotland to the five-star lifestyle of a PR guru in the fledgling travel industry of the early seventies in London.

Very Private and Public Relations is the autobiography of Travel PR guru Jim Dunn, who takes us on a rollicking ride from poor boy growing up gay in a small town on the west coast of Scotland to the five-star lifestyle of a PR guru in the fledgling travel industry of the early seventies in London.

We discover Dunn’s story, from his childhood as a mummy's boy to his regular encounters on the "Love Train" home from Glasgow and his first love with a man in uniform.

His life quite literally 'took off' when he got his first job on the weekly newspaper Travel Trade Gazette. The fact that he admits he couldn't type, write or understand one end of PR from the other didn't stop him from creating the UK's leading travel and leisure PR consultancy over the next 3O years.

This book is a tour de force of Jim's life and work and is a fascinating insight into the travel business as we know it today - from the decidedly unglamorous British Benidorm to Hong Kong and the Bahamas.

‘Jim Dunn’s epic climb from Glaswegian poverty to millionaire status is the classic rags to riches story – with a very significant difference. Jim makes no secret of the dangers of being a gay man in repressive Scotland in the fifties. His honesty, humour and compassion in this frank autobiography will be an inspiration to gay people who still feel shunned in the modern world. I’ve known Jim for 30 years. Now I know – and like – my friend even better.’
Peter Hobday, broadcaster, presenter and former BBC Radio 4 Today programme host.

'The amiable Jim Dunn recounts his private and public climb from Scottish slum to Suffolk villa with Bentley – an ascent from Gourock up into those international ‘five stars’. As you’d expect, he reads well and is extremely honest – perhaps too honest…’
Alan Whicker CBE

‘Jim Dunn’s book is fascinating, telling of an extraordinary journey which started with his early life in Gourock where he worked on the local newspaper’s entertainment pages bringing much needed money into the family home. The travel PR industry was in its infancy then and he was a prime mover in its rapid growth with his dynamism and ingenuity. I so enjoyed working with him for many years on Wish You Were Here…? He was great fun to be with, and still is – inventive, demanding, outrageous. His book is not just an account of a remarkable life, it’s the story of a hugely successful industry in which he played a vital part.’
Judith Chalmers

‘There’s a traditional love-hate relationship between most journalists and PRs, none more so than among travel writers and travel pr’s, who are likely to share days, weeks and even continents in each others company. And there was no better company than JD which is why he was able to field as many journalist candidates for his trips to hell holes in the Costa Brava as to sumptuous suites in Hong Kong. Very Public and Private Relations reflects his personality – witty, outrageous, fun, frank and unashamed. The book also reflects, humorously, the fledgling travel industry itself as we now know it, which in early days, with no history or experience to draw on, often lurched from success to disaster, living by the seat of its pants. I am delighted to have shared this roller coaster with Jim.’
Jill Crawshaw, The Times, Travel Correspondent

‘In this very open and sometimes scurrilous memoir, Jim Dunn describes growing up as an underprivileged gay boy in 1950s Glasgow. He has come a long way from the days of the secret and fearful life of a young man when being gay meant secrecy and isolation. He can now be seen with all the trappings of a wealthy and successful businessman. He is a happy self-made man.’
David Tickner, reFRESH Magazine

'Jim Dunn’s rags-to-riches story is and inspiration. Sometimes scandalously honest, and providing a fascinating glimpse into how one gay man helped the travel revolution.'
Gay Times

‘Well, Jim has recently written an amazing ‘rags to riches’ story in this book ‘Very Private and Public Relations.’ As Alan Wicker says in the jacket blurb ‘This book gives a fascinating insight into how the travel business matured into the multibillion pound industry we know today – from British Benidorm to Hong Kong, the Bahamas and beyond’. Jim also writes in a painfully honest way about what it means to be growing up, and gay, in 1950s Glasgow. What a page-turner.’
Penny Visman, Globetrotter Magazine

Jim Dunn has 40 years’ experience in journalism and public relations and extensive knowledge of advising organisations in the corporate, travel and leisure, entertainment, property and financial sectors.

His current business interest is in helping to build up a small group of luxury 5 star hotels in Europe but he still keeps his hand in at writing and contributes a regular column on his travels around the world.