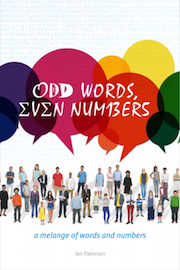 A first in the examination of the interrelationship between words and numbers, through mathematical games and diversions, word and mathematical puzzles, and popular mathematical concepts.

The main purpose of Odd Words, Even Numbers is to stimulate and entertain readers of all ages.
It's a sad fact that standards of numeracy at all levels appear to be in decline in this digital age. This book shows that by treating numeracy as a vital aspect of literacy we might be able to arrest this fall in standards and find joy and intrigue in words and numbers again.

Ian Paterson shows us how we can use the English language to describe a selection of mathematical concepts; by explaining many mathematical games and diversions; and by including a large number of word puzzles and mathematical puzzles, each of which demonstrates the close interrelationship between words and numbers.

It's written especially to appeal to those who who might deny having any interest or expertise in handling or playing with numbers. Indeed, the book requires little mathematical ability of its readers to enable them to derive fun and enjoyment from its pages, particularly if their interest is more inclined towards words and language.

A consistent theme of the book is that in order to be able to communicate effectively - whether in words or numbers - we must learn to communicate clearly and without ambiguity.

6 Number Into Word and Word Into Number

14 Some Diversions Involving Words and Numbers

16 Numbers and Words In Disguise

17 Origins and Categories Of Number Words

23 Numbers Within Numbers, Words Within Words

25 All The Letters and All The Numbers

Answers: A to Z

Ian Paterson has spent over five-sixths of his life collecting and studying books on recreational maths; mathematical puzzles, games and diversions and the English language. He is the author of best selling book A Dictionary of Colou’ also published by Thorogood.

‘I loved every word. Beautifully written and well researched this is a book for all ages who like a verbal or numerical challenge. An absolute must for those with children or grandchildren who like to be stimulated by words and numbers.’

Ian Paterson has spent over five-sixths of his life collecting and studying books on recreational maths; mathematical puzzles, games and diversions and the English language. He is the author of the soon to be released novel Sally Forth also published by Thorogood.