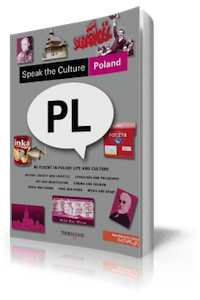 The fifth book in Thorogood’s groundbreaking series of cultural guides takes Poland as its subject. Written and produced in collaboration with the Adam Mickiewicz Institute, Speak the Culture: Poland provides a fast track to understanding the key events, figures and customs of this richly creative country in the heart of Europe.

The book begins with an overview of the country’s cultural foundations – the history, language and identity – before moving on to Poland’s artistic achievements, from the Renaissance poetry of Mikolaj Rej to the contemporary films of Roman Polanski. The key figures of art, architecture, literature, philosophy, music, theatre and cinema are revealed succinctly and colourfully. A chapter on media outlines the main newspapers, magazines and television and radio stations. The final section of Speak the Culture: Poland covers the country’s living culture – its religion, social mores, education, economy and more.

Like previous titles in the series, Speak the Culture: Poland works as a thorough yet accessible accompaniment to travel, language learning and business relations. Only by grasping the culture of Poland will readers develop a fully rounded knowledge of this historic but little understood nation.

Praise for the series

The Speak the Culture series… is the best crib sheet for the curious we have seen.
Daily Telegraph

No publisher has attempted anything quite like this, and the publishers Thorogood are to be much applauded for their ingenuity and achievement.
Barry Forshaw
Travel Journalist

Andrew Whittaker is a successful journalist and writer who has travelled widely, and written extensively on culture and the arts.