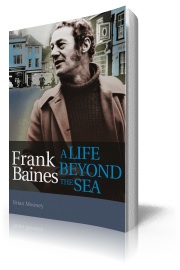 Frank Baines - A Life Beyond the Sea

This book is a revelation – it fills in the huge gaps that Frank left in the narrative of his quite extraordinary life and reveals a far more complex and far more accomplished man than anyone ever suspected.

Able Seaman, Chindit Officer, Hindu monk, businessman, journalist, writer, film extra, prisoner, long-distance cyclist – there were many sides to Frank Baines. Indeed, perhaps Frank himself never quite knew who he was, nor where he belonged. He only discovered his real name when he was a teenager. He was gay at a time when homosexuality was still against the law.

Banished from a childhood paradise in Cornwall following the death of his father, the distinguished architect Sir Frank Baines, Frank roamed the world for many years seeking to regain that Shangri La. The quest took him on the high seas to Australia and South America, and then to the army in India and behind enemy lines into Burma, where he went to war with the Chindits and fell in love with his Gurkha orderly.

After the war he settled in a Hindu monastery in the Himalayan foothills, but, restless as ever, he moved to steamy Calcutta. Here he became a businessman, repairing tea chests, and embarked on his writing career, starting out as a journalist and columnist on The Statesman, one of India’s most prominent daily newspapers.

Frank returned to England in the mid-1950s and became a successful author.

Brian Mooney is a prize-winning international journalist and author of three books. He worked for Reuters for 30 years, covering events in more than 50 countries. He was nominated for a Pulitzer Prize and awarded an American Press Club Award for his work in Poland during the Solidarity Revolution. Brian has an MA from Oxford in History and Modern languages. He is a Common Councilman in the City of London. In recent years he has worked in high-profile international PR assignments in Russia, Bangladesh and India. He has published: Breaking News (Wiley), a business book about the near-collapse of Reuters; Frontier Country (Thorogood), a light-hearted account of a walk around the borders of Essex; and Shaping History (Arcturus), a study of great leaders.