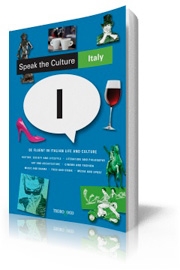 The fourth title in a groundbreaking series designed to sit alongside travel and language guides, providing an indispensable insight into national culture

Italy has a bewildering cultural patrimony. Where do you start? With Giotto? With Caravaggio? In murky Etruscan tombs or the mighty Roman Pantheon? Speak the Culture: Italy sifts through a sprawling 3,000 year saga and makes sense of it; dissecting architecture, music, food, art, literature, cinema and much more.

Michelangelo, Machiavelli and Mussolini: you’ve heard of them, but how did they live? What were their achievements and failings, and how are they remembered in Italy today? Speak the Culture: Italy explores the place of these and other figures in the national identity, in the story that made the modern nation.

Culture is covered in its broadest sense, extending into the everyday modes of life – the food and drink, religion, politics, sport, character and so on. On one side lies the famous lust for life, expressed in everything from the Carnevale Di Venezia to the family mealtime; on the other lies a darker story of organised crime, corruption and political transience. And while the Italian peninsula has its ancient history, as a state the famous boot, or Lo Stivale, remains young, so the nuances of strong, surviving regional identities are also revealed.

Andrew Whittaker is a successful journalist and writer who has traveled widely, and written extensively on France and the Mediterranean countries. Speak the Culture: Italy, is his fourth book in the series.