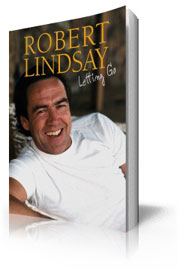 The inside story of one of Britain’s best loved, best known actors, which reveals in his own words, for the first time, exactly what makes him tick.

New release: Paperback including a free audiobook version on CD!

The inside story of one of Britain’s best-loved, best-known actors

The inside story of one of Britain’s best-loved, best-known actors, which reveals in his own words, for the first time, exactly what makes him tick.

Robert Lindsay describes not only the lasting influences of his childhood, schooling and family, but also how his acting started and then took off with Citizen Smith. He reflects on the highs of a runaway West End and Broadway success, the lows of a brief flirtation with Hollywood and what keeps his feet on the ground.

Beyond the stories of Robert Lindsay the star – and intriguing showbiz encounters, for example with Katharine Hepburn, Michael Jackson and others – Letting Go sheds honest light on Robert Lindsay the man, on his relationships and his family, and provides insights into his approach to being an actor.

Letting Go is illustrated with photographs, many previously unseen, from Robert’s life and career.

Letting Go was chosen by the Daily Mail to appear in their 2011 summer supplement.
Click to see:

LOWDHAM BOOK FESTIVAL: Thank you so much for the wonderful evening at Caythorpe, you where terrific. I tagged along with my wife Carolyn – she asked the question, “Do you think that your devilishly good looks are an advantage.” I left a real fan and have just finished reading `Letting Go’. Robert, what can I say, you have had an incredible career and amazingly the best is yet to come! Remember: “Enjoy yourself, it’s later than you think.” Give us yet more to enjoy and `use the force’ we need your talent.
Steve Guy June 2010

Robert Lindsay first found fame as sitcom star Wolfie Smith, and went on to win Tony, Olivier and Fred Astaire awards in the theatre for Me and My Girl, before finding further success on TV, earning a Best Actor BAFTA for GBH. More recently Robert has appeared on stage in The Entertainer and Aristo and on television in the popular BBC sitcom My Family, but this book could be said to be dedicated to ‘my family – the real one’.