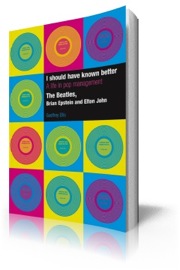 I Should Have Known Better

Geoffrey Ellis spent forty years in the music business, working closely with the Beatles and Brian Epstein during the 60s, and Elton John and his management in the 70s. From an unrivalled position he has written a highly informed account of the music business from the 60s to the mid 90s and an insider’s view of the careers of many of the most significant players. His insight is less than adulatory and often critical, in particular of the Beatles and Brian Epstein, his friend.

During the 60s Geoffrey Ellis was Chief Executive of NEMS Enterprises, Brian Epstein’s company, at the time when the Beatles became global superstars. His book contains insights and stories, many previously unpublished, concerning the often tortuous business and personal affairs of Epstein, and the aftermath of his death. There is also much about Elton john, of whose management Ellis formed a vital part from the earliest days with Dick James Music and then with John Reid Enterprises, including a trenchant account of the High Court action brought by Elton John against Dick James, in the course of which Ellis himself spent two and a half days in the witness box.

1 Tomorrow Never Knows
2 A Day In The Life
3 Taxman
4 With A Little Help From My Friends
5 Here,There And Everywhere
6 Eight Days A Week
7 Ticket To Ride
8 It’s All Too Much
9 Baby You’re A Rich Man
10 A Day In The Life
11 Magical Mystery Tour
12 Only A Northern Song
13 How Do You Do It?
14 Back In The USSR
15 Do You Want To Know A Secret?
EPILOGUE When I’m Sixty-Four

‘What a refreshing change, after the chauffeurs and the half cousins, to have a book about the Beatles by someone who was on the inside as opposed to outside in the corridor, trying to listen through the key hole. Geoffrey Ellis was a vital part of NEMS, an intimate associate of Brian Epstein, a suit who knew where the skeletons lay. I learned a lot I didn’t know about their money matters, the history of Northern Songs, paternity claims, Brian’s sex life. It provides new insights – not all of them complimentary, especially about John Lennon…’

Hunter Davies, journalist and author of the only authorised biography of The Beatles

‘I enjoyed it very much. This is a fascinating insider’s account of an extraordinary period: I learned a lot I didn’t know before about the way the business took off, and also about Brian Epstein himself. It’s also very funny in parts – it makes a great story.’

‘What one might expect from the memoirs of someone who witnessed the backstage lives of legendary artists is either an exercise in revengeful gossip or a shamelessly sycophantic tale. Ellis’s account of his work as Chief Executive of NEMS Enterprises, the company run by Brian Epstein, The Beatles’ first manager, and later at Dick James Music, is thankfully neither. His sympathy for the colourful and self-destructive Epstein and the grudges against Lennon in particular do not undermine his place as an accurate narrator. Written in a conversational style, this book will certainly be interesting to those who wish to learn more about the intricacies of the music business.’