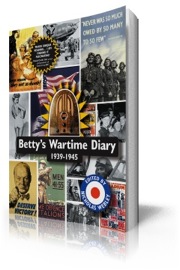 A time which seems familiar to us today through film, but which was really another age, springs to life in the pages of Betty's Diary; funny, touching and unaffectedly vivid.

What is this book about?

Some years ago, journalist Nicholas Webley stumbled across a remarkable find during a routine investigation in a small house in Norfolk – a diary.

The diary was kept during the war years and scribbled for the most part in school exercise books and on scraps of decomposing paper. It was written by a seamstress born in the 1880’s. Betty Armitage, the seamstress, was a theatrical dresser during the first part of the century and moved to Norfolk before the war. Her diary is unusual, as it views the events of the war through the eyes of someone born around the time of Queen Victoria’s Jubilee. So many accounts of the war are based on military experience or life in cities during the Blitz; here the great events of those years are viewed from the country: privation relieved by the occasional poached pheasant, upheaval as thousands of bright young US servicemen ‘invade’ East Anglia, quiet heroes and small-time rural villains.

PART ONE: ‘WE ARE WARRIORS ALL’

PART TWO: FAR TO GO AND MUCH TO DO

‘Betty’s day by day struggle through an ordinary small-town wartime life makes unique reading. I lived through the era and can vouch for the truth of it all… fascinating.’

Nicholas Webley is a journalist and historian with a special interest in World War II. He is the editor of the best-selling A Taste of Wartime Britain, also published by Thorogood.