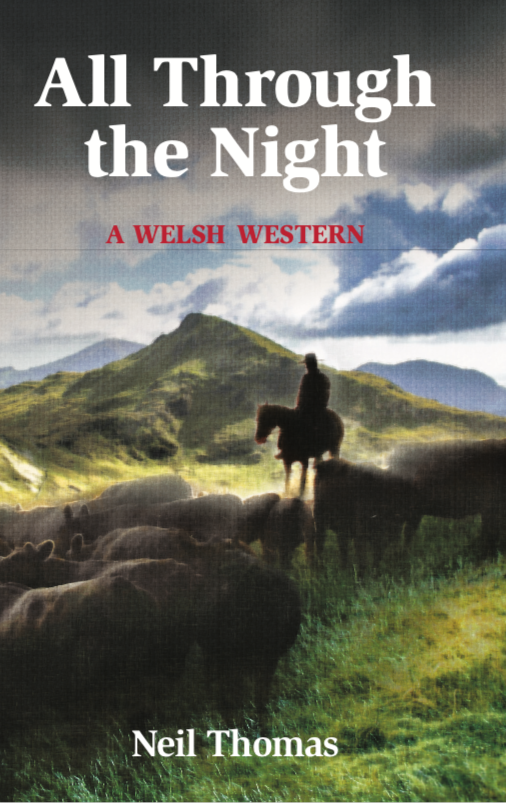 All Through the Night stakes a claim to be the first ‘Welsh Western’ and suggests that cowboys were as much invented in Wales as in Wyoming.

This tale of Welsh drovers taking a large herd of cattle from the ‘wild west’ of North Wales to London in the 1790s and stakes a claim for these interesting characters to be the first cowboys. What happens in Westerns happened here to Welsh drovers on their cattle drives.

Running through this Welsh Western, with its personalities, adventures and incidents, the story incorporates cultural, emotional and human elements that make Westerns so appealing.

Written very much in the style of an old-fashioned Western, All Through the Night explores how people act in the drama of their own lives.

Neil Thomas was born in Wrexham and can trace his Welsh roots to the Lleyn Penisula, to Montgomeryshire and to Carmarthenshire.

In keeping with economic migration, particularly in the late nineteenth century, his relatives hailed from the land and villages of mid and north Wales and made their way to the mining communities in the Cynon Valley. Another branch of the family came from Kidwelly and Llanelli where they were in trade.

One grandfather was a congregational minister in South Wales, the Black Mountains and in Shropshire and the other was a lifelong miner and colliery winding man. The author’s parents met at Aberystwyth University and went into teaching, primarily in Wrexham. All his grandparents were fluent Welsh speakers, his parents could speak some Welsh whilst he speaks a few words only.

The author left Wrexham to go to Cambridge University and lives in East Anglia, but makes regular visits to Wales.

In All Through The Night, his first work of fiction, he has taken delight in trying to demonstrate that we should not think that Americans have the monopoly over the ‘wild west’, cowboys, trailhands, ‘rawhide’ and cattle drives.